By The Docplexus Fam1 March 2022No Comments 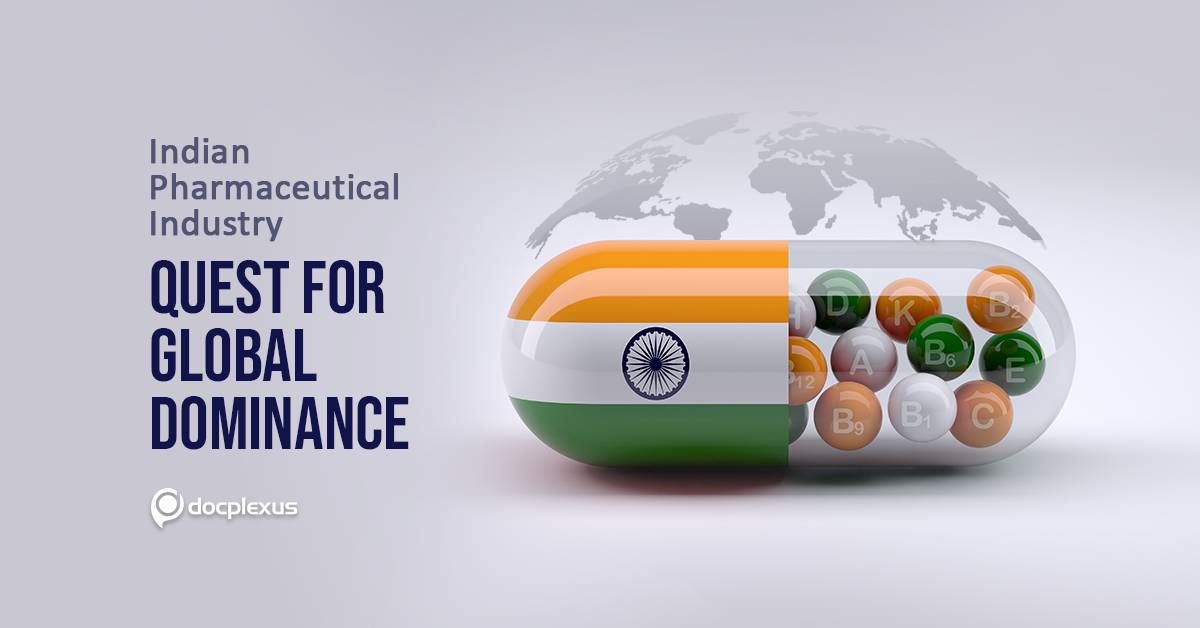 In many ways, COVID-19 has provided a fillip to both earlier and recent initiatives of the Indian pharmaceutical industry. Our collective fight against the novel coronavirus has reinforced our intent behind such promising initiatives, unfurling tremendous possibilities of India becoming a global pharmaceutical leader.

Today, India is ready to save humanity with two ‘Made In India’ coronavirus vaccines – Narendra Modi

This write-up explores the potential opportunity for India to bolster its ‘pharmacy of the world’ image.

The scale and possibilities of India’s pharmaceutical ecosystem

India is considered the “pharmacy of the world” for multiple reasons.

If we talk about the volume of pharmaceutical production, we are ranked third globally, supplying drugs to over 200 countries and fulfilling 50 percent of the global vaccine demands. Generic drugs have traditionally been India’s stronghold and have contributed over 70 percent to the overall market revenue in 2018.

We produce and supply cost-effective, quality-controlled generic drugs across the world, both in highly regulated markets like the USA, Europe & Japan, and other parts of the world like Africa, Latin America & ASEAN countries.

If we talk about future possibilities, India has the potential to become a research & clinical trial hub, a $35 billion opportunity over the next five years, enabling higher value-added jobs. In fact, the Indian healthcare and pharmaceutical sectors are slated to grow by a whopping 754 percent by 2060. (Source: Statista)

Even Mckinsey expected the Indian pharmaceutical market to hit USD 55 billion in 2020, with the potential to reach USD 70 billion in an aggressive growth scenario. 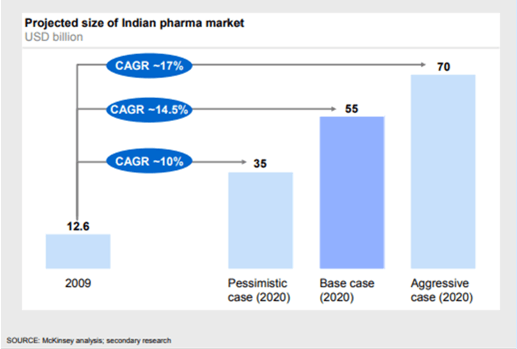 The way we have encouraged global engagement during COVID-19 (and also via a spree of schemes in 2019), by exporting large numbers of hydroxychloroquine (HCQ) to America, has reinforced India’s image as the “global pharmacy of the world.” Moreover, it has acted as a stimulus to our grand vision, which was conceived back in 2013.

i) To make India a global leader in producing low-cost generic medicines.

ii) Systemizing processes to expedite drug discovery and development in the country.

iii) To place India as one of the top five pharmaceutical innovation hubs (developing one out of five novel drugs globally).

In this regard, concentrated efforts to streamline approval mechanisms have been made. Manufacturing plants are being set up across the country, boosting employment and providing further impetus to the sector.

The existing government schemes like Ayushman Bharat for health insurance and Jan Aushadhi for availing low-cost but high-quality generic drugs, along with promising agreements with global pharmaceutical companies, will go a long way in expanding the market. This approach is tailor-made for the increasing demands of the middle-class and the elderly population, and the rising incidence of lifestyle diseases. To enable its vision smoothly, the government of India has chalked out a multi-billion-dollar investment plan with 50% public funding through a public-private partnership model.

Well, first and foremost, unlike the U.S. market, our drug prices aren’t controlled by market forces. Instead, a regulatory mechanism drives the entire process. This doesn’t leave companies with much leeway to incur profits. As a matter of fact, the number of drugs that are price-regulated had shot up to 860 in 2019 from 74 in 1995.

Even with slim margins to work with, Indian pharmaceutical companies have drawn maximum output, by continuously refining their processes. But still, such limitations aren’t letting them upgrade their manufacturing capabilities.

There is no denying that we have gradually progressed towards value-added formulations with higher margins, but the COVID-19 pandemic has exposed our import dependence on China for critical APIs (to produce one-fifth of our global supplies). It continues to be a significant threat to our healthcare sector and global supply chain. 90% of Indian antibiotic manufacturers rely heavily on China for importing antibiotics APIs such as penicillin, cephalosporins, and macrolides.

Considering such a dicey situation, continued disruption in the supply of APIs can lead to a significant shortage of essential drugs in India. (If you want to check some of the most critical APIs for prominent ailments like cardiovascular diseases, diabetes, or tuberculosis, then you can refer to the National List of Essential Medicines [NLEM]).

As of now, 70 percent of our Active Pharmaceutical Ingredients (APIs) come from China. To give you a bit of a background, the Indian pharma industry was self-reliant in producing antibiotics and active pharmaceutical ingredients (APIs) till 1990. But due to the lack of incentives and innovation, we gradually lost ground to China.

Finally, in 2013, the Katoch Committee was set-up to reverse this equation and reduce our dependence on China. The objective of the committee was to assess the Indian drug market’s existing condition and the relevance of bulk drugs. It chalked out interventions and concessions to make India self-sufficient.

In a nutshell, the Katoch Committee recommended specified zones and mega parks for the manufacturing of APIs, having effluent treatment plants (ETPs), testing laboratories, power plants, and IPR management, among others. However, the implementation didn’t gather the required momentum as API manufacturers were apprehensive about our strict environmental laws. Moreover, a consensus between government and pharmaceutical companies couldn’t be reached on corporate tax breaks and cheaper electricity connectivity.

As we are facing the scarcity of APIs in the current scenario, the Indian government and pharma should reestablish their dialogue to work on the recommendations and have better processes associated with APIs. It’s a convenient time for us to go full throttle and create a robust infrastructure, by re-calibrating the financial, legislative, and regulatory aspects. The Indian government is materializing a policy to expedite the production of APIs within the country. We are:

Executing a promising strategy like ‘China, Plus One,’ identifying 53 drug materials and APIs for getting manufactured on a priority basis, involving an investment of 1.3 billion U.S. dollars in domestic pharma companies and state-run manufacturers.

For facilitating a modern bio-medical exploration, research institutions and the pharma industry should collaborate and let cross-pollination (exchange of resources) happen. Public institutions and private enterprises should share concerted efforts to persuade scientific research and catalyze our emergence as a bio-medical leader. Venture capitalists will have a significant role to play here, and we must grab their interests via a string of incentives.

Can we emerge as a self-reliant formulation exporting nation?

The prices of Indian generic medicines are amongst the lowest in the world. As per a report AIOCD-AWACS MAT (2019), 11 percent of the formulations in India are under the price point of Rs 5.

Despite uncompetitive prices, leading Indian pharmaceutical companies have the capacity to not only meet the needs of the Indian market but also fulfill the requirement of essential drugs globally.

So, it’s high time we tapped this capacity and become a powerhouse in drug R&D/manufacturing. How?

iv) Becoming self-reliant in the manufacturing of APIs, KSMs, and intermediates (We must work towards setting up bulk drug parks in SEZs).

vi) Accelerating the regulatory and testing pathways for all drugs.

The advent of biologics and biosimilars in the Indian pharmaceutical industry

Looking at it from India’s perspective, our regulatory authorities approved the first biosimilar in 2000, and that number stood at 98 in September 2019. The number of approvals has greatly increased in the last five years, giving a much-needed impetus to biologics and biosimilars. According to the Association of Biotechnology Led Enterprises (ABLE), the biologics market is slated to grow at a compound annual growth rate (CAGR) of 22% to reach $ 12 billion by 2025 in India.

The government has taken a range of steps to make India a hub for biotechnology-based drugs. These include:

i) Revising the guidelines released by DBT and Central Drugs Standard Control Organization (CDSCO), to streamline the regulatory pathway and enable faster approvals.

ii) Focusing on building skills and infrastructural capacity to expedite research in novel biologics and biosimilars.

Our energized medical diplomacy shows a lot of promise

In the times of a pandemic, we have perfectly exuded our persona of a ‘Global Leader.’ From a healthcare perspective, the way we have engaged with the world in the past few months has been both promising and substantive.

While most countries were preoccupied with internal crisis management, and rightly so, India took a step ahead and evacuated people from all the neighboring countries. For instance, we brought back our students from Wuhan in the initial stages of this pandemic. To encourage global health engagements, we are deploying medical professionals, and even our military doctors have been sent to countries like Nepal, the Maldives, and Kuwait. They are helping in managing the pandemic at the grassroots level. Moreover, our medical staff has been conducting online training sessions for its SAARC counterparts, helping them bolster their capacities.

The move to export HCQ and paracetamol to the U.S., Brazil, and a handful of European countries, has reinforced our ‘pharmacy to the world’ image. Be it Africa or Latin America, we are exporting HCQ without any disparity, mobilizing Indian Air Force flights, foreign evacuation charters, and even diplomatic cargoes.

Though our response to COVID-19 hasn’t been flawless, we have been decently proactive and managed the situation with a sense of purpose. It will certainly have a long-lasting impact on how the world sees us.

There are three major possibilities that can catapult the Indian pharmaceutical industry towards global leadership. The first is to expand healthcare infrastructure, coverage, and emerge as a global hub for drug discovery and development. The second is to pick our spots in making India the manufacturing hub of critical APIs, to de-risk global supply chains. The third is to instill a sense of purpose, and assertiveness in our medical diplomacy.

To know about our digital channels and solutions for maximizing the outreach of Healthcare brands, you can reach us at info@docplexus.co.in/ +91 9822824281

You can see how this popup was set up in our step-by-step guide: https://wppopupmaker.com/guides/auto-opening-announcement-popups/